It might feel like winter, but it is only really autumn and the weather over the past few days in the Strzelecki Ranges, relentless rain and wild wind, have been the archetypal Autumn Break, the point at which the rains come to punctuate the progression of the seasons. It seems late this year. I was recently told that if we don’t get the break by Anzac Day we are in for a dry season. However, it might have been later than usual, but the Break’s heavy downfalls over the weekend could only herald moist conditions ahead.

The images below are classic autumn fare: Gingko biloba against a background of evergreens; a seedling Acer palmatum that steals the show despite its humble origins; Liriodendron tulipifera, whose Autumn foliage is even more spectacular than its marvellous flower; Fly Agaric growing under the Castanea sativa, Mespilus germanica fading away brilliantly in the veggie patch, Punica granatum fruit stranded on bare branches.

These photos were all taken at Clear Springs, Mirboo, where despite the gloomy skies, there was enough colour coming from the changing foliage and the flowers of camellias and chrysanthemums to remind us of the sun, hidden somewhere, up there behind the clouds. 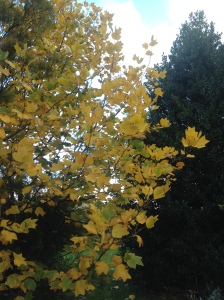 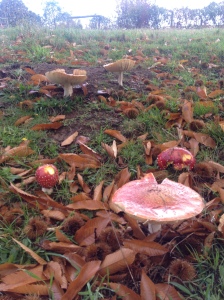 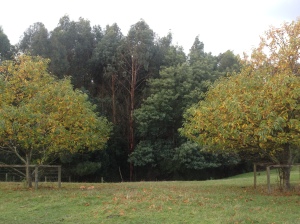 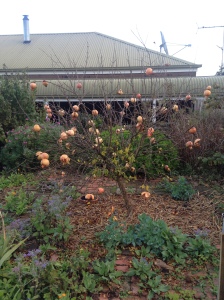