The lurid pink flowers of a naked lady, Amaryllis belladonna, rises up from parched ground and bone dry grasses in an unmown corner of my garden. These bold trumpets on the end of slender stems create for me an iconic image. A visual moment that long ago informed my gardener’s mind. For me they have always been associated with age and neglect, of the long abandoned garden of a farmhouse that has decayed, been destroyed or disappeared. A reminder that this space was once held separate from the cattle or the sheep or the arable fields, and was cared for. It is a reminder too that autumn, here in southern Australia, is a time for the ending of things and it is also a great time of renewal and replenishment.

The adaptation that gives the naked ladies their drama is the fact that they lie dormant over the hottest and driest part of the year. Then their flower buds emerge from the ground as though rising from nothing. Their leaves appear afterwards, growing after the flowers are spent, to gather energy over the autumn, winter and spring when conditions are more conducive for growth. They store this energy in their bulbs, which enables their dormancy and the great floral exuberance in Autumn.

These Nerine sarniensis are not intimidated by the strident Agave desmettiana variegata and the overhanging pomegranate. This part of the garden receives no irrigation.

And they are not the only members of the Armaryllidaceae to grow in this way. At least four species of Nerine are summer dormant. Although for Nerines the leaves usually being to appear with the flower rather than waiting for the flower to die down completely. Two of the summer dormant nerines are fairly commonly found in gardens here: the clear pink Nerine bowdenii and the brilliant and in my experience vermillion N. sarniensis. A less common variety, the modest N. pudica, whose white flowers bear markings of faded cerise, is also available in specialist nurseries. (I have no experience of the fourth,  N. ridleyi. I would love to know if anyone grows it here.) Also, there are countless cultivated varieties of summer dormant nerines ranging in colour from white, through pink and red. 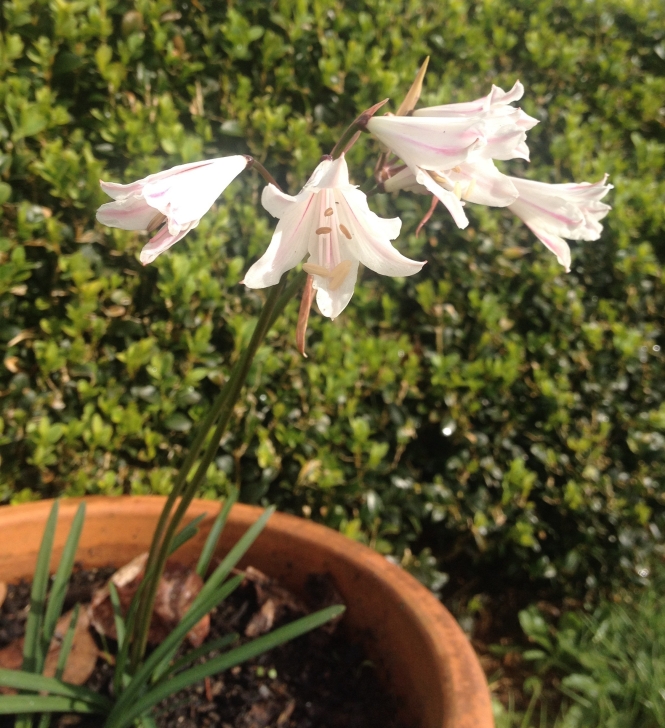 Compared to the outrageous colour of some of the other nerines, the delicate colour and form of Nerine pudica show that its name is well deserved, ‘pudica’ coming from Latin, meaning pure or modest.

All will grow in a well-drained soil and where they are not ruthlessly irrigated over summer. I have been growing the more common species in the ground in South Gippsland for years as everyone has and they are perfectly happy. Their love of good drainage means they are happy growing in pots too. I am slowly building up my numbers of Nerine pudica in a pot so that I can start to plant it out in the garden without fear of losing it.

The most stunning of the Autumn flowering South African bryophytes in my opinion is the blood lily or Haemanthus coccineus. Red goblet shaped flowers emerge from the barren ground at the start of Autumn unadorned by any foliage. Ross Uebergang used this species to great effect in his show garden at the Melbourne Flower Show (MIFGS 2018), emerging from a flawless mulch of granitic sand. As a child, however, I remember being more fascinated by the enormous, glossy strap-like leaves that emerge from the bulb once the flowering has finished. My most successful clump grows under a deciduous shrub.

Lycoris aurea is probably waiting for an upgrade to a more fabulous pot. I am waiting for it to produce more bulbs. We both know it doesn’t love being disturbed.

Lycoris aurea the golden spider lily is another plant that grows like the above southern Africans. The Lycoris tribe, however, come from Asia: limestone country in China and Japan.  It has developed an almost identical form to the nerines and has similar adaptations to cope with dry summer conditions. They too arise in autumn with a display of  flowers that glows in the mid to light shades of gold, hence both its scientific and common name. After two years, I am still nursing this one along in a pot. Sources of information vary about how happy it is in more acidic conditions. Soon, I hope to have a few more bulbs to experiment with in my garden’s soil.

The bulbs of each species mentioned above do multiply over time, although not so rapidly that they ever become too much of a good thing. They are perennial; they persist. Each year they return to prompt reflection on the change of season, to consider what has passed and to contemplate what is to come.