Spring in the garden is an ongoing unfurling of new petals, the bursting of rounded buds, the seemingly endless succession of novelty, freshness and delight. It is so easy to become  intoxicated by this fragrant cocktail. So easy to wander around taking photos for Instagram. So easy to forgot there are still chores to be done. Space needs to be made for the growth that is coming.

This is really the perfect time for the clearing of the decaying old growth from last season that has been pleasing the eye all through Autumn and Winter with its warm earthy tones. Now, amidst the green flush of spring, these tones are out of sorts and the new growth at the base of the herbaceous perennials such as Miscanthus, Kniphofia and Nepeta and the similar subshrubs like Pervoskia and Agastache, is keen to get on and grow. The cuttings make excellent mulch. I have stock piled all the miscanthus for use in the vegetable garden over the coming months. Other, less pliable, more twiggy cuttings have found there way to the slow compost heap, where they will sit for the next couple of years before being put back on the garden. If I had a mulcher I could speed up the process. 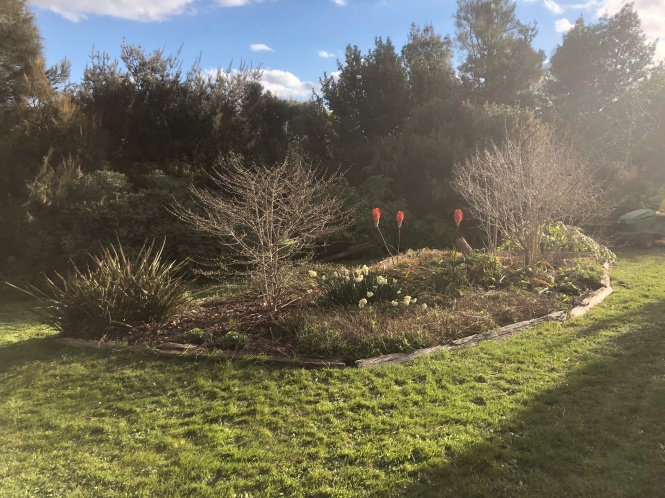 The after shot. Cutting back the chrysanthemums has revealed an unruly clump of Narcissus ‘Erlicheer’ and the last three flowers of the champion Kniphofia ‘Winter Cheer’

This is the last chance to get plants in the ground to have a chance to be established before summer. Usually October is the cut off mark for me, but this year I think we are having an earlier season. My friend Peter at Hill Top Hives has already collected a swarm of bees for his apiary, a clear sign that spring has truly arrived in South Gippsland. I have planted many new plants this year already and am keen to see how well they do over the coming months and years.

I still have room for some more plants. Especially after the clearance of a few dead or dying shrubs that have lived out the term of their natural life. One of them was a very robust and vigorous Grevillea victoriae. A great section had started to die back last year,  and I had been hoping it wouldn’t spread, but other branches were dying, so I decided it was time to let go of what had been a very successful shrub for a dozen years or more. I have little success with the bigger grevilleas for any longer than that. They blow out or die back. Live fast, die young seems to be their motto. I would love to know if anyone has any longer living favourites in the medium to large shrub range? The smaller varieties, like the stalwart Grevillea lanigera ‘Mt. Tambouritha’ (sometimes marketed as Mt. Tambo), G. baueri, which strikes readily from cuttings and is worth growing for the foliage alone, and my favourite G. rosmarinifolia, shown below in its broad leaf form.

None of these will suit the purpose of the new gap in the native hedgerow along the western boundary of the garden. Maybe it’s a chance to put in a different type of native flowering shrub. This is a bird friendly section of the garden that is alive with wattle birds  for much of the year sipping nectar from the banksias and with black cockatoos ripping Hakea sericea fruits to pieces for the seeds within. These seem to be more long-lived in this climate. I had better make up my mind soon. In the meantime, I’m off outside with my camera.