The Gordonia axillaris, or fried egg tree, has begun the new season with a new look

High Summer has come along in fits and starts, as all the seasonal changes seem to do in southern  Victoria. The first day of December yesterday was a celestial day of heat, sunshine and endless blue sky. The changeability of our weather is legendary, so it was with no surprise that during the night we were woken by thunder booming directly overhead and a flood of rain that would lift the ark.

The rain will keep the garden, and the paddocks beyond, green through until January, which is a blessing in a year that is still set to be named, El Niño. Who knows what the place will look like in Late Summer? For now we are thankful and revel in the green.

And are busy keeping the green in check. Amazing spring growth has now to be taken in hand with the hedge trimmers and brush cutter being the tools of choice. And I have been busy too making a few changes in my garden.

For most garden designers, the best type of gardening is the creation of a new garden from scratch, approaching a tabula rasa with a grand vision and implementing it. I am no different. I feel the thrill of creating a place that did not exist before, the joy of giving a garden to a client when they had none.

Nevertheless, a garden is a most ephemeral and fluctuating work of art. Time brings growth. It can also bring a diffusion of the original aim and vision. The care of the garden might have led it to a dead end; a cul-de-sac of neatness and despair. For, as managers of such a dynamic phenomena, gardeners need to do more than merely trim the box and cut crisp edges. We need to make ongoing decisions: to cull, to shape, to replace, to introduce.

As has been said before, it is the people who maintain the garden who are the real custodians of any garden design. Good gardeners are able to tap into the intent of the garden’s original design. They are challenged by an ageing garden to decide with their client the best way forward: restoration, rejuvenation or reinvention.

I delight in refining an older garden’s design and planting plan to interact with the change that time brings to it. Particularly in my own garden. And I would say my approach is one of perpetual rejuvenation, where I try to get back to my original intentions but within the limits of what nature has decided will actually happen.

Much of my ornamental garden is made up of mixed borders consisting of shrubs and trees growing amidst perennials and annuals. The conditions are constantly changing. Picture the Gordonia axillaris, which for many years was a slender exclamation mark in its bed surrounded by irises, Francoa, Campanula and Anthriscus.  Over the years it has developed a middle age spread, squeezing out the undergrowth. Furthermore, it was also making a mess of the lawn as its skirts billowed over edging, shading the grass and destroying the shapes of the bed and the lawn.

Following a conversation with a dear friend whose own garden I have long admired, I decided to remove all the lower branches of the Gordonia, up to about 800mm, so that stone edging would be revealed, the lawn given a fighting chance and the overall form would dominate less. Interesting new opportunities also arose.

Danae racemosa, the poet’s laurel with Iris foetidissima in the background

A great quantity of space under the Gordonia for shade loving plants came into view! Finally, a few impulse buys that had been languishing in the nursery were to find a home: a low shrub, Danae racemosa, the poets laurel, from Stephen Ryan’s nursery, with deep green glossy leaves should bring a rounded form to contrast with the scrappy leaves of the neighbouring iris; Polygonatum multiflorum or Solomon’s seal have been introduced so their elegant arching stems will draw the eye into this new garden beneath the canopy. 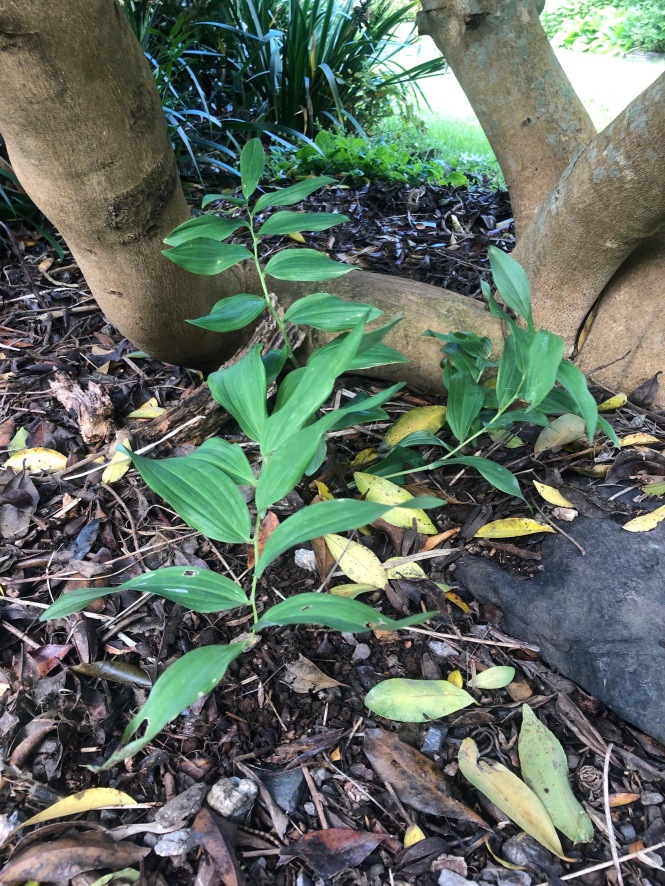 The newly revealed limbs catch the late afternoon sunshine, the lawn is yet to recover

The rains have helped all these late plantings along no end. But now I might just take a break from the renovations as new plantings really do have to stop now until we are on the other side of the long summer months ahead.